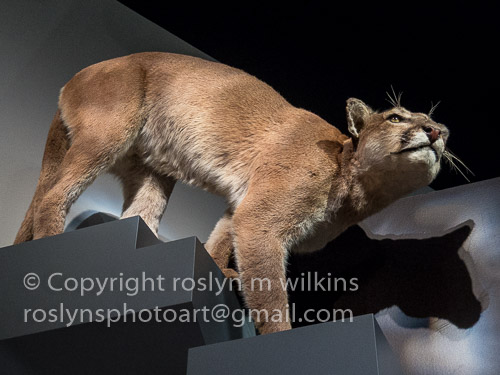 This is not P-22, obviously, but a similar mountain lion.

While I was at the Natural History Museum the other day to visit the Extreme Mammals exhibit, I saw the new display about P-22, the mountain lion who lives in Griffith Park.

In the hills of Griffith Park, a mountain lion roams. His name is P-22.

Born in the western Santa Monica Mountains, P-22 crossed both the 405 and 101 freeways, eventually reaching Griffith Park. He lives alone in this small territory by the Hollywood sign, surrounded and confined by the city of L.A. P-22 was first spotted by now NHMLA Citizen Science Coordinator Miguel Ordeñana in 2012 as part of the Griffith Park Connectivity Study, a joint effort of Cooper Ecological and the U.S. Geological Survey. 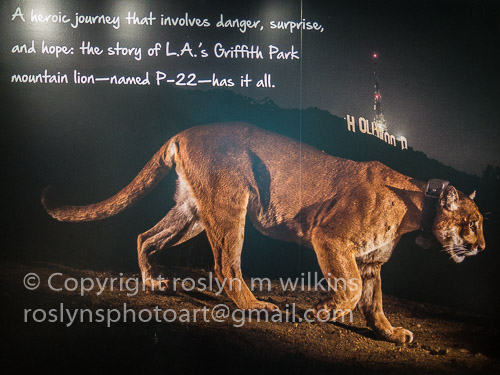 P-22, and other big cats like him, are often blamed for encroaching on people’s homes. The truth is, people are the one’s encroaching on the home of the mountain lions.

This is a map of the LA area and the city these lions have to deal with. The dark red splodge at lower right shows P-22’s habitat. Basically he is caged in by the freeways all around him. Many cats have lost their lives trying to cross them. 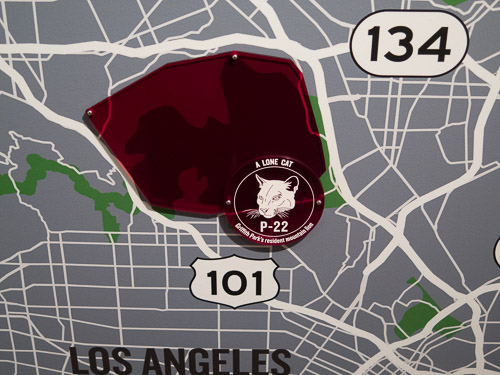 A closer look at P-22’s area. He lives in Griffith Park all by himself.

P-41 is also hemmed in by freeways all around.

The inability to move around to other territories is the cause of inbreeding, as with P-19, who, having no choice, mated with her father. This doesn’t bode well for the survival of the species.

Wildlife crossings over the freeways have been proposed for years but so far nothing has been done. It isn’t just the big cats that suffer from being penned in, it’s all the species of animals, insects, plants that are stuck in small habitats. My answer is, let’s keep people trapped in their own neighborhoods and let the animals roam freely! 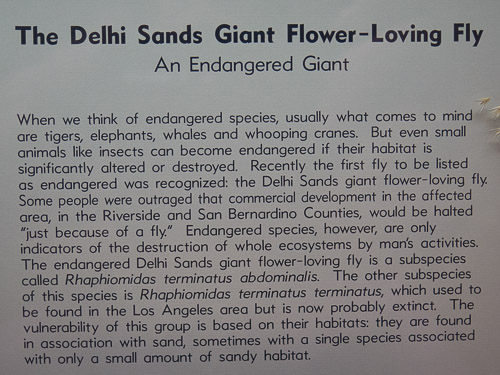 Just as important is the habitat of insects like the Delhi Sands fly. If just one small part of the eco-system is endangered it causes a domino effect for all of us.

One fly, one species… and then the human species. We live in dangerous times! 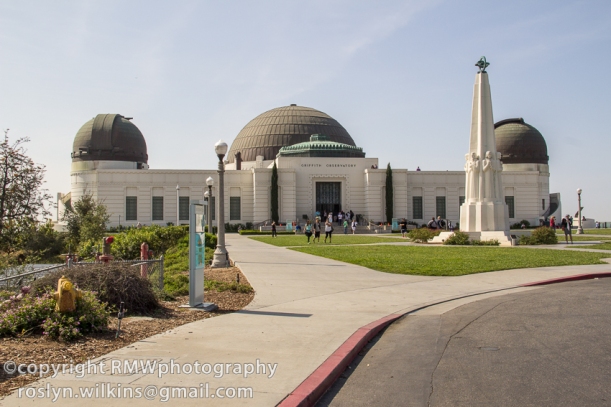 A friend and I were on a stroll along Sunset Boulevard from West Hollywood to Union Station in downtown Los Angeles a few weeks ago (7.5 miles in case you are interested). At Vermont we saw a DASH bus with “Observatory” on the header. As both of us happen to be fans of public transportation we decided that sounded like a good idea. So this past Saturday we left our respective homes early in the morning and met at the Sunset/Vermont Metro train station. The DASH shuttle stops right across the street. The downside is that the Observatory shuttle only runs at the weekends. The upside is the fare is only 50 cents (25 cents for seniors) and takes the TAP card.

This was the first time either of us had ridden on a DASH route. According to the website: “DASH provides frequent, inexpensive and convenient bus service in downtown Los Angeles and in 27 neighborhoods all across the City of Los Angeles. Each route is designed to serve travel within that neighborhood and to connect to other regional transit services such as Metro Rapid and local routes, Metrolink and Metro rail lines.” Sounds like another public transportation adventure waiting to happen.

The view above, obviously, is of the Hollywood Sign. Another reason why tourists like to come to the Observatory.

It’s been VERY hazy lately so I was afraid by the time we arrived at the Observatory on Mount Hollywood in Griffith Park, there wouldn’t be any kind of view, which is one of the reasons to make the trip: spectacular views of the mountains and city. On a clear day this panorama of downtown LA is stunning but at least you can see the buildings!

When the Endeavour space shuttle arrived in Los Angeles this was supposedly the best vantage point. But getting up here that day would have been a traffic nightmare. I was thrilled enough when it flew over my deck! 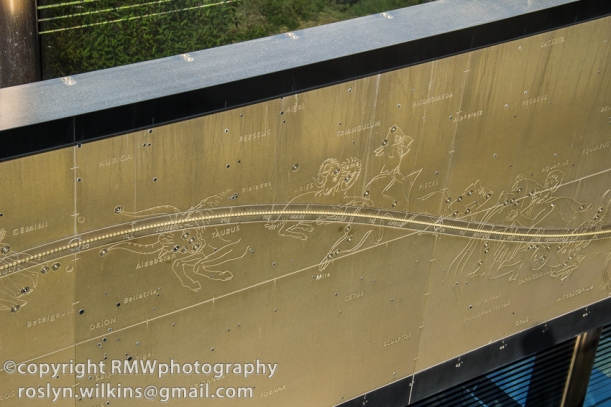 This is the detail of an engraving showing the constellations that runs along one side of the building.

The Griffith Observatory opened on May 14, 1935. The man who envisioned it, Col. Griffith Jenkins Griffith, passed away on July 6, 1919 but he left enough money in his estate to build it. (You can read the whole story here.) The Observatory’s planetarium was only the third to be built in the United States and was not even invented until 1923, after Col. Griffith’s time. So the cinema he had planned became the more fitting planetarium. 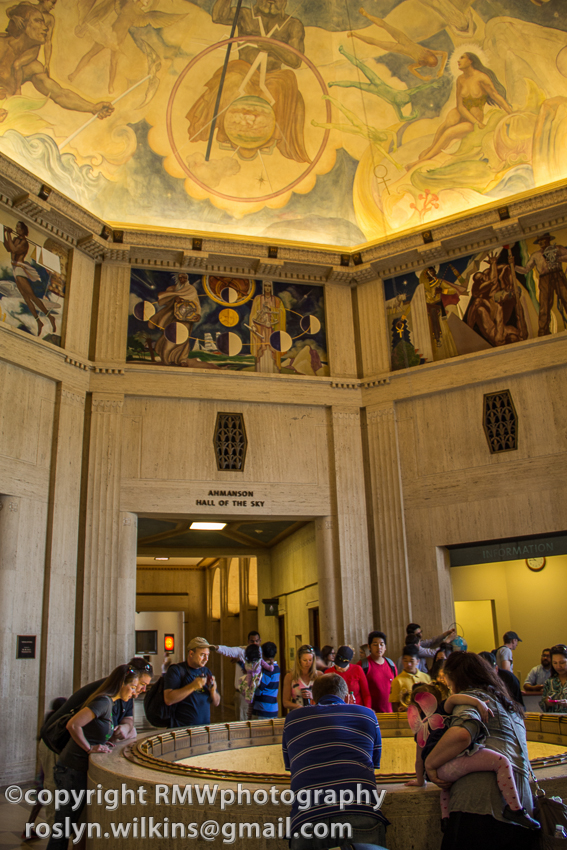 It’s hard to see in this photo but there is a pendulum that swings from a wire attached to the ceiling across the pit below. That’s what the people are peering into.

My apologies for this photo. I forgot to reset the ISO on my camera… this is what happens when an old brain meets a new-fangled DSLR camera!!!! The photo was pitch black but I managed to bump it out in Lightroom so at least you can see the pendulum swinging. At left the ball is hitting a set of pins at intervals. 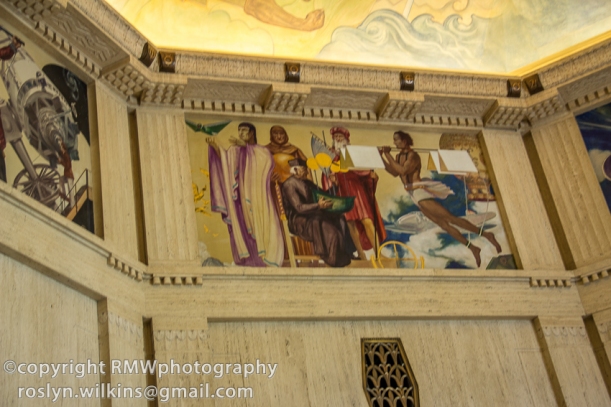 Another look at the ceiling of the Central Rotunda. Obviously the lighting conditions are not ideal.

Nikola Tesla invented the Tesla Coil in 1891. According to Wikipedia, Tesla used these coils to conduct innovative experiments in electrical lighting, phosphorescence, X-ray generation, high frequency alternating current phenomena, electrotherapy, and the transmission of electrical energy without wires. Today we are familiar with the name because of the popularity of Tesla electric cars. 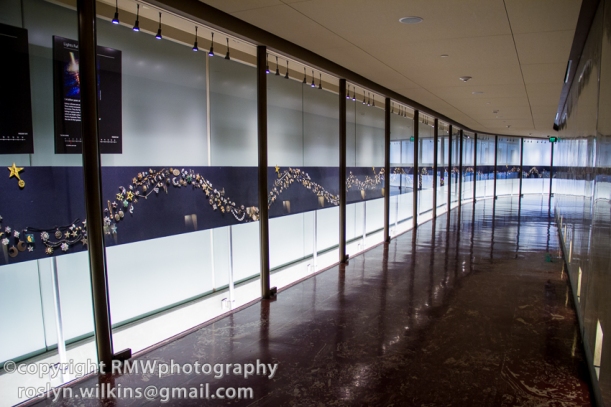 In 2002 the Observatory closed its doors for the first renovation since it opened. As the building sits at the top of a hill there was nowhere to expand outwardly, so the decision was made to build underneath. The Cosmic Connection is the corridor linking the historic building above with the new Gunther Depths of Space below. The passageway contains a 150-foot timeline of the history of the universe decorated with celestial-themed jewelry in the glass case that lines the corridor.

The story of how the expansion of the Observatory was engineered is pretty amazing. They had to lift the existing building up on jacks in order to excavate underneath. It was all planned with computer programs and nobody knew if it would actually work… if the building would remain intact… until the day they came to lift it up! Whew, I bet there were a lot of sleepless nights around that time!

Below are some photos of the Depths of Space exhibits. Click on an image to start the slideshow: 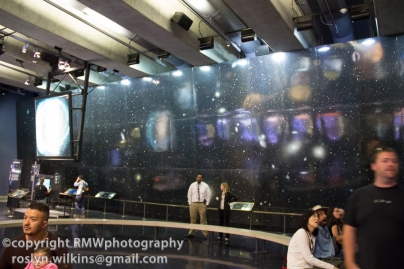 The day before our visit we had a 5.1 earthquake in the Los Angeles area plus hundreds of aftershocks. So the seismography exhibit below was, unfortunately, very timely. 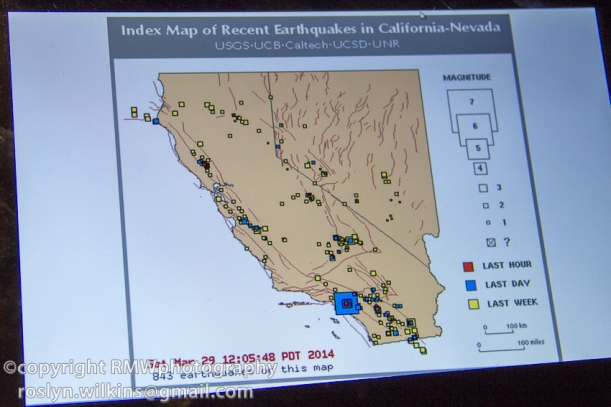 The big blue square is Friday’s 5.1 shaker. I was upstairs in my office sitting at the computer a little after 9:30pm when the quake hit. I wanted to get downstairs but the jolting and swaying was so severe I had to sit down on one of the stairs and hold on to the railing. Usually when there is a  tremblor around 3.0 or more I stay put as there really isn’t anything you can do. But this one was a little scarier.

Our beautiful moon with a piece of moon rock showcased next to it.

I believe this is a photograph (rather than a painting) printed on to a rolling canvas screen. Better than my photos anyway!

We attended a show in the planetarium, Centered in the Universe. I believe it may have been the same one I saw when the Observatory re-opened in 2006 but with my memory everything is new again! Isn’t this a beautiful door? The other theater, the Leonard Nimoy Event Horizon, shows a film about the history of the Observatory and space-related documentaries. No, I don’t think re-runs of Star Trek are on the schedule but that may not be a bad idea…

The images in the slideshow below are of sun flares but I could see them as paintings in a museum. The center image could have been painted by Van Gogh:

When we came out of the safety of the building it seemed all hell had broken loose. The parking lot was jammed with fire trucks, EMTs and Park Ranger vehicles with their lights flashing. Above helicopters from various agencies were buzzing around. Apparently two hikers on separate trails had become lost. This may be a park in the middle of a city but this is still wild country not to be trifled with. I don’t know what the story was in this case but too many hikers, experienced or not, take off on their own without any consideration for what might happen to them including mountain lions and falls. Always best to hike with a partner. The good news is that, after how many thousands of dollars of my tax money were spent on this, both the hikers were found. 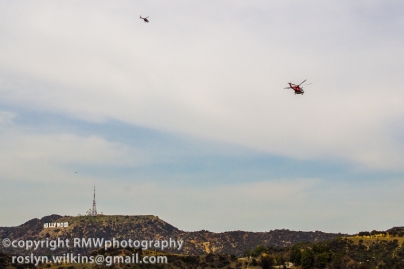 So it was time for us to line up at the shuttle stop and leave the stars and planets here in the Hollywood Hills to come back down to earth.

Coming up the 1 1/2 miles in the DASH bus we had noted the cars parked bumper to bumper on both sides of the road and were extremely glad we were in the bus. If you look very carefully at the road cutting across the middle of this photo you can see the cars parked.

Looking to the west and the ocean

Looking east to the far mountains 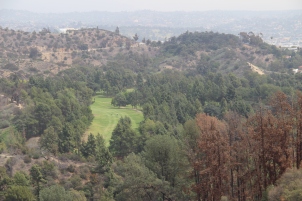 The golf range at Griffith Park 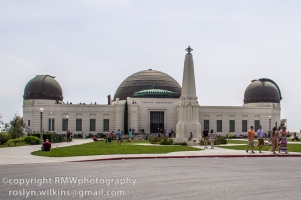 One last look at the Observatory

Another adventure comes to a close. On to the next one!

All photos and content copyright roslyn m wilkins. Please feel free to pass along this post via email or social media, but if you wish to use some of our images or text outside of the context of this blog, either give full credit to myself and link to One Good Life in Los Angeles, or contact us for proper usage. Thanks!