As you know, my beloved cat Friday passed away on Sunday, July 21 of this year. As we had spent eighteen wonderful years together it was an incredibly sad day. He will always be in my heart.

A couple of weeks later I visited two rescue Tuxedo Cat brothers who were just adorable but I decided as I still had Pharoah, three cats were too much for me to deal with.

A couple of weeks after that, just for the heck of it, I looked at the website for the City of Los Angeles Animal Services, read about the available Tuxedo Cats, wrote down the names, and drove over there.

Even though I had not really decided I was ready to adopt just one month after Friday’s passing, I took the cat carrier with me just in case.

The city animal shelter in West LA certainly has improved since the last time I was there eighteen years ago. It is like a hotel for dogs, cats and rabbits. There are small rooms where six to eight cats can comingle. I assume they take turns being removed from the cages.

I interviewed four older Tuxedos in the five-year-old range as I had decided I didn’t want a kitten but a more mature cat closer to Pharoah’s age (he is coming up on eight). They were nice cats but none of them really seemed like the right fit. Besides, I wasn’t in a hurry to adopt.

The animal services lady who was helping me kept mentioning this young cat, Romeo. He was ten months old. His owner had recently died, the family couldn’t keep him, and he needed a home right away. But I told her I didn’t want a cat that young. 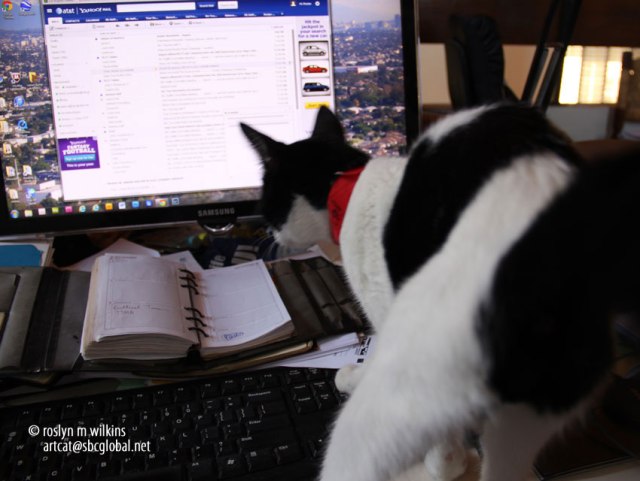 After his nap, Freddie decides it’s time to set up his own email account.

However, after the other cats failed to impress me, I agreed to take a look at Romeo.

It was love at first sight on Romeo’s part. Or maybe he was just determined to be adopted by whoever would take him home that same day, no questions asked!!! 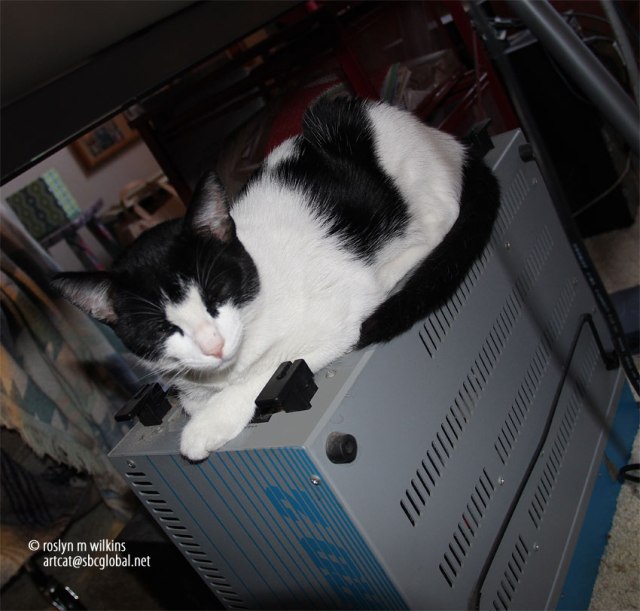 Freddie may be a high-tech cat but he has respect for the past as he takes a nap on my first personal computer ever… the 1985 KayPro 2 that I use as a foot rest under my desk!

We were put in a private room. I walked back and forth with Romeo following at my heels. I sat down and Romeo immediately jumped on my lap, then started rubbing his head all over my face. Bleaaaaah. He wasn’t interested in playing with toys, just being with me.

How could I say no? 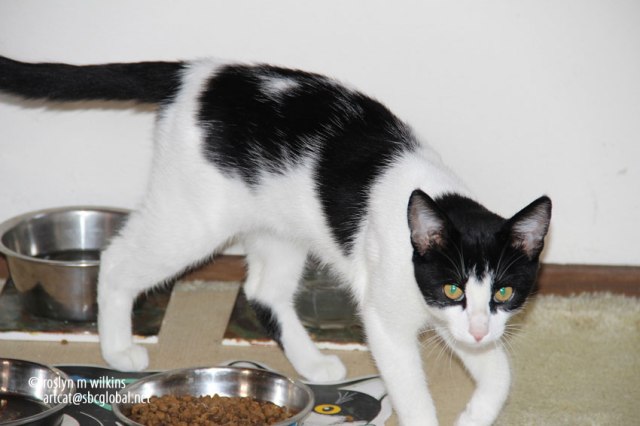 And most important of all, this is where the food dishes are located.

After the proper paperwork was filled out, as he was already fixed, we popped him into the carrier and into the car for the drive home.

Good golly! Friday had a raucous meow but he could not compete with the ear-shattering sounds coming out of this little animal. The whole car was shaking with the lion-like roaring! What had I done?

Fortunately, once we got home all the meowing stopped.

Freddie is already learning to pose for the camera to show off his beautiful markings.

He has been a member of the household for eleven days now. He has settled in so well it could be eleven years. Of course, there was the normal hissing and teeth-baring the first few days between Pharoah and Freddie, but it is mostly over now.

Pharoah doesn’t mind Freddie coming up to him and sniffing him out. He even lets him share his toys.

So now I know I made the right decision adopting another cat only one month after Friday’s departure.

Although I like his original name, Romeo, I renamed him Freddie in honor of Freddie Mercury of Queen. I think there’s a resemblance, don’t you? {:>) 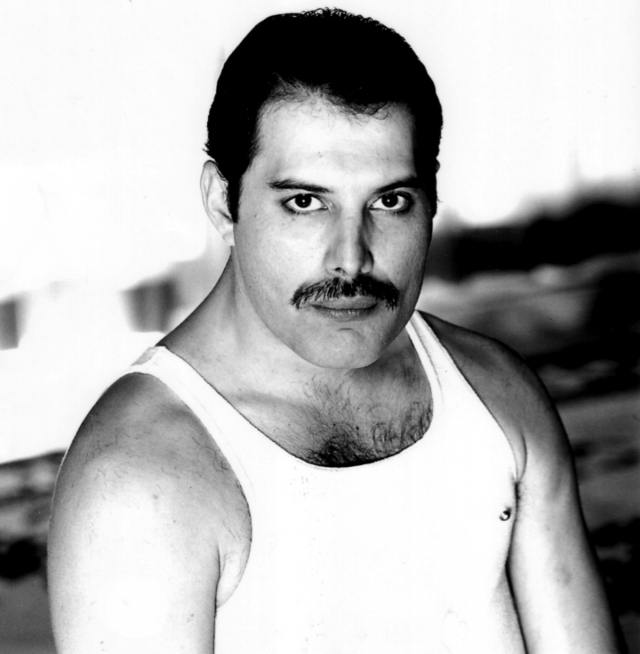 All photos and content copyright roslyn m wilkins unless otherwise noted. Please feel free to pass along this post via email or social media, but if you wish to use some of our images or text outside of the context of this blog, either give full credit to myself and One Good Life in Los Angeles, or contact us for proper usage. Thanks!